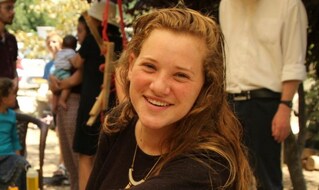 On Friday, August 23, 2019, Rina Shnerb, 17, sustained fatal injuries from an improvised explosive device (IED) that was thrown at Rina; her father Rabbi Eitan Shnerb, 46; and her brother Divir, 19; by Muslim terrorists.  The attack occurred while the victims were hiking near Danny’s Spring, also known as Ein Bubin Spring, which is located in a remote area outside of Dolev, in the Binyamin region, about 60 kilometers (37 miles) on a circuitous route north of Jerusalem, Israel.

Rina’s father and brother, who sustained non-fatal injuries, were treated by paramedics, one of whom is related to the Shnerb family, before they were airlifted by helicopter to a hospital.

Danny’s Spring, is named after Danny Gonen, 25, who, on June 19, 2015, was murdered in an attack by a Muslim terrorist who shot both Danny and a second victim, who survived.

On August 25, 2019, Israeli press reported that the Muslim terrorist organization Hamas has been working — for over a year — to bring explosives engineers to Judea and Samaria.

On September 28, 2019, Israeli news sources also reported that the following three alleged Muslim terrorists, all of whom are alleged members of the Popular Front for the Liberation of Palestine (PFLP), had been arrested for the bombing that resulted in the murder of Rina Shnerb and injuries to Rina’s father and brother.
​The Israeli Security Agency said that the trio, led by Arabid, planned to carry out additional terror attacks, including shooting attacks and a kidnaping.  It was reported that, during their interrogation of those arrested, the existence and location of another explosive device was disclosed.  This device was located and detonated by Israeli security forces.